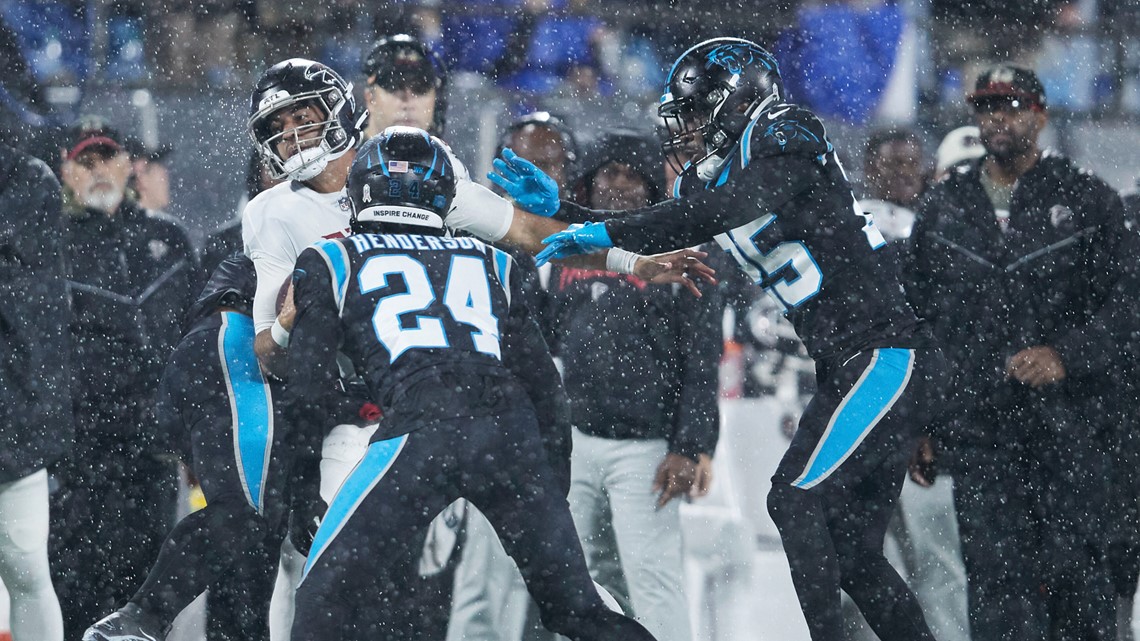 It could have been the weather, the short workweek, or the Atlanta Falcons having a total breakdown. In any case, the Carolina Panthers defeated their NFC South foe with a game that was well-played on all fronts.

The Panthers’ offense did just enough to overcome the Falcons 25-15, and the Carolina defense had Marcus Mariota, the quarterback for Atlanta, in trouble the entire game.

Following a well-executed drive by the Falcons that resulted in a touchdown pass from Mariota to Drake London in the end zone, Atlanta reduced the deficit in the third quarter. For the first time since 2020, Younghoe Koo failed to make an extra point, keeping the score at 13-9.

Chuba Hubbard, D’Onta Foreman, and even quarterback P.J. Walker ran efficiently for the Panthers on their deliberate retaliation drive. Carolina scored on a Foreman touchdown from 12 yards out to cap the drive.

The contest was significantly impacted by the weather. As remnants of Hurricane Nicole entered the Charlotte region Thursday night, Bank of America Stadium experienced wind gusts of up to 35 mph and sporadic downpours.

The game featured two teams with losing records and, at times, ineffective offensive, which created the perfect storm for a defensive struggle match that was already anticipated to be low scoring.

The Panthers moved 41 yards downfield and scored the game’s first points on a 46-yard Eddy Pieiro field goal that went in after hitting the left upright after the Falcons punted on their first drive.

When Laviska Shenault Jr. executed a sweep to the left side and sprinted 41 yards for the game’s first score in the second quarter, the Panthers increased their lead.

On the following drive, Mariota threw an interception that the Panthers turned into another field goal by Pieiro to take a 13-0 lead late in the first half.

The Falcons successfully completed a drive to close the half, and they later added a field goal of their own to make the score 13-3.