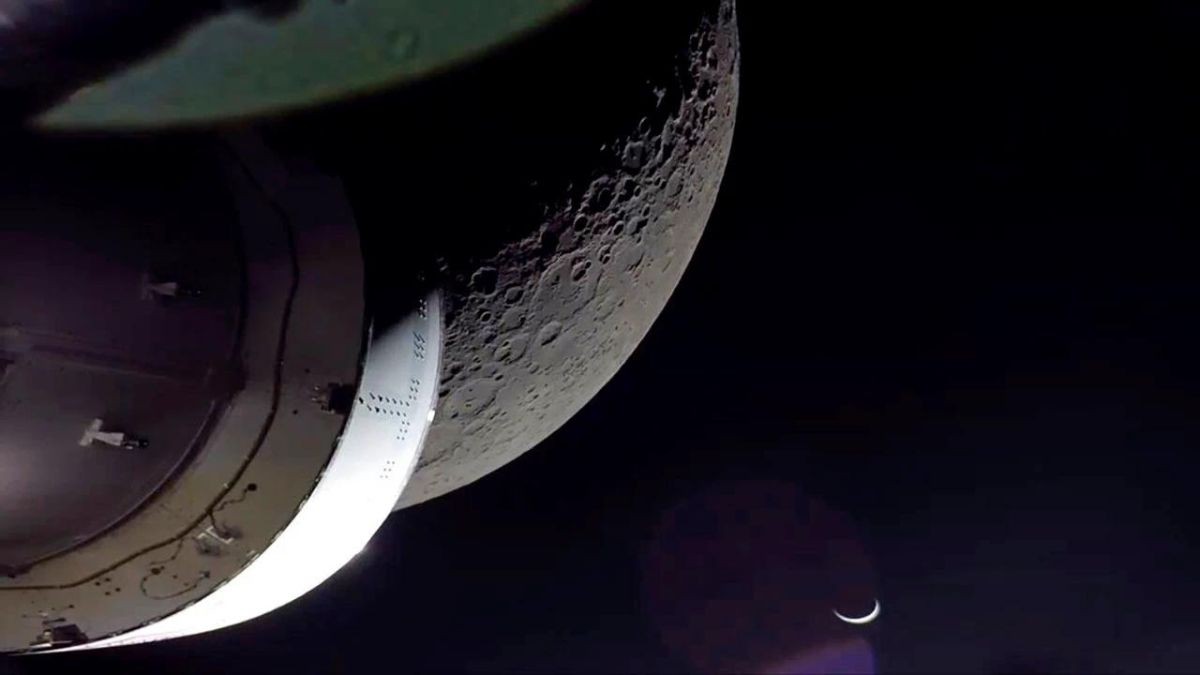 Intriguing video from NASA’s Orion spacecraft flying just 687 miles above the lunar surface has been made public.

On Monday, December 6, just over three weeks after the Orion spacecraft had departed Earth on the Artemis I mission, a flyby took place that brought the unmanned spacecraft as close as 79 miles to the moon’s surface. Last month, the spacecraft also came very near to the lunar surface.

.@NASA_Orion is only 687 miles above the Moon. #Artemis pic.twitter.com/a8nIvNX26U

The film of the lunar flyby was recorded just before an engine fire intended to put the spacecraft on a course for its homecoming later this week, as the video commentary shows.

A breathtaking image of the moon, a crescent Earth, and a portion of the Orion spacecraft was later released by NASA official Jim Free, who had earlier confirmed that the engine fire had been successful.

On November 16, the Orion rocketed into space atop NASA’s brand-new Space Launch System (SLS) rocket, the most potent rocket to ever take off.

Prior to a crewed trip that will take the same path as the current flight, the Artemis I mission is intended to test the rocket and spacecraft. It implies that a number of very fortunate astronauts will one day be able to see these same breathtaking vistas firsthand while traveling into space on the Orion spacecraft.

Last fly-by complete! We’re coming home!@NASA_Orion flew about 79 miles above the lunar surface today, and returned this spectacular view. The spacecraft is now on a course for Earth and will splashdown on Dec. 11. Follow along: https://t.co/8WV8GliitY pic.twitter.com/MOIcwlCITE

A permanent base on the moon where astronauts can live and work, much like they do on the International Space Station now, is another goal of NASA’s Artemis program. Additionally, the first crewed expeditions to Mars, which NASA estimates may occur in the 2030s, might use the moon as a stepping stone.

The SLS rocket and Orion spacecraft have performed flawlessly thus far, exceeding expectations for the Artemis I mission. Now, everyone will be watching the spacecraft’s return on Sunday, December 11. If this last leg of the journey can be successfully completed, NASA hopes to fly the crewed Artemis II mission in 2024.

The NASA website has all the information in case you wish to learn more about Orion at this moment.