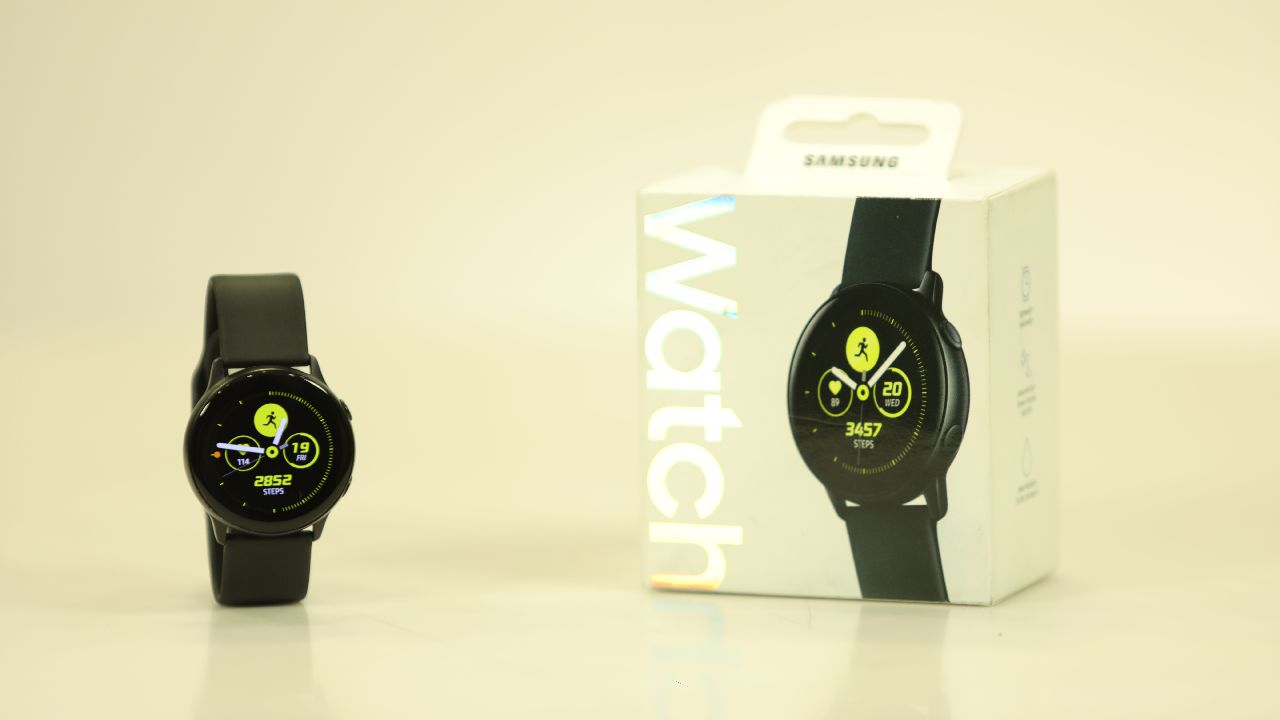 Samsung has not had a great time in the wearables space and they remain to be trounced by Apple with every passing edition. This year, Samsung has doubled-down on it’s smartwatch and have launched the Galaxy Watch Active that is placed as an amazing fitness gadget yet boasting features that not just compete but also surpass every other brand when it comes to pricing, design, and functionality.

Design, Build
Apple has fastened with the square design on its Watch series and Samsung in a bid, not to ape its arch-rival has continued to launch its smartwatches with a circular design. This rounded display is a common trait for Android wearables, and Samsung has proceeded to use it on the Galaxy Watch Active. To add a bit of sporty appeal to it, the Galaxy Watch Active doesn’t come with a rotating bezel which according to me is a bit of a miss as it would have elevated its position quite drastically. However, being a budget device, we can ignore this feature as it is by no means make or break addition.

By eliminating the rotating bezel, Samsung has managed to keep the weight down to quite a large extent, and this has worked it their favor as it feels incredibly comfortable to use for long periods without any wrist fatigue also, without this feature, the Galaxy Watch Active looks stylish, thinner, and without agreeing on it’s premium features.

As stated earlier, the rotating bezel is a miss as it allowed me, as a power-user to access content a lot quicker. As there is not any bezel here. You are forced to swipe across the display. This takes a bit getting used to if you come from a previous Samsung smart-watch however, in time, I found that the swipes are quite intuitive and scrolling through the various options becomes second nature.

Though the Galaxy Watch Active comes with a budget-friendly price tag, it is by no means a cheaply constructed device. It is built of premium materials such as metal and looks and feels exceptionally high-end. I appreciated the fact that it comes with a straightforward design and the only notable attributes are the two buttons that are located on the right at the two and four positions. While the buttons take a bit of getting acquainted with to determine due to its almost flush nature; I found that it takes just a matter of days to get adjusted to them completely.

The pride and glory of the Samsung Galaxy Watch Active is the 1.1-inch (2.81cm) with the 360 x 360 resolution Super AMOLED display that features the amazing color depth of 16 million colors. If you have used wearables from other brands in the past, say for example the Samsung Galaxy Watch or Apple Watch, you will find the size of this display to be a bit limited as it is rather small. It looks exceptionally tiny on a male’s wrist but suits most female’s wrists perfectly.

With that being said, if this is your first smartwatch, you would not find any problems here and getting used to it takes just a matter of time. Also, the display is entirely usable, and though it is smaller than most smartwatches I used before, I found that navigating through the different menus completely doable. The screen is bright, crisp and text is legible on this full-colored Tizen smartwatch. This is mainly in part due to the excellent Samsung display used here. Even in direct sunlight, content on the screen is discernible, and using it is an absolute pleasure.

Being classified as the fitness smartwatch, the Active is also water-proof to an extent, and it boasts the ingress protection certification of IP68 which allows you to submerge it in water to a depth of 5-meters —which is pretty impressive. This will enable you to take it for a swim and record some laps as it also comes with a swim tracking feature.

Battery
As discussed earlier the all new Samsung Galaxy Watch Active comes with powerful two-day battery life. The 230mAh battery is rated at 45 hours, and during my long testing period, I marked it last just short of two whole days. With that being said, life of the battery is the subjective feature, and it will vary person-to-person usage. While I would assume that it offered an approximate 48-hours on a single charge, I feel with limited usage and little to no fiddling around, and you could stretch it to about three days; which by the way is pretty excellent for a smartwatch.

Additionally, there is a low battery mode that kicks in when your battery is nearing empty, which is around the 20 percent mark. If this mode, is turned on, you can milk the battery for quite a considerable amount of time till you place it back on its charger.

Speaking of charger, the Galaxy Watch Active comes with a charging pad that is somewhat bigger than the Apple Watch option and to top up the 230mAh battery, and it took about one hour fifty minutes.