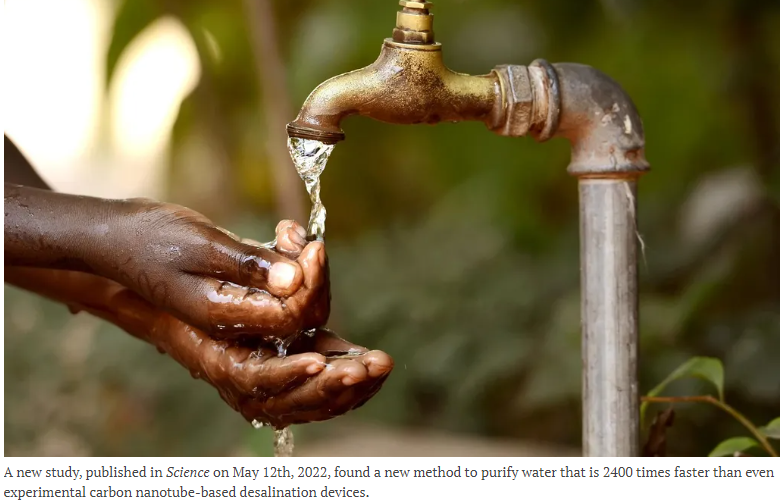 Water shortage has been a significant problem worldwide for years, despite plenty of water in the oceans. The reason is that fresh water is scarce. By 2025, some estimates state that about 230 million African people alone will face a water shortage. And among them, 460 million people will live in water-stressed areas. And so, many companies designed desalination plants to help cope with this shortage. But, these plants carry a hefty energy cost. So, to tackle that, researchers sought other alternatives and developed a Teflon-like membrane to filter saltwater 1000 times faster than desalination plants.

Furthermore, it is the first time researchers have successfully filtered salt from water using fluorine-based nanostructures. Additionally, the Teflon-like membrane is more effective than desalination plants as it is faster, use less pressure, is more effective, and require less energy.

Fluorine is a lightweight element that is water-resistant, hydrophobic, and a vital component of Teflon. In addition, lining the pipes with Teflon can increase water flow, and that phenomenon intrigued professors from the University of Tokyo. Thus, they set out to investigate how they could make this work on the nanoscale.

“We were curious to see how effective a fluorous nanochannel might be at selectively filtering different compounds, particularly water and salt,” said Associate Professor Yoshimitsu Itoh. So, the researchers ran complex computer simulations and concluded to develop a working sample.

Additionally, there are two methods mainly used to desalinate water – thermally and by reverse osmosis. However, both these methods consume a lot of energy. But, the researchers found that the fluorous nanochannels require less power to purify salt water and have other benefits.

The Teflon-like membrane is chemically manufactured nanoscopic fluorine rings stacked and implanted in an impenetrable lipid layer. It resembles the organic molecules found in cell walls. Additionally, the researcher created several test samples with nanorings ranging from size 1 to 2 nanometers. Plus, they examined the presence of chlorine ions on either side of the test membrane to test the effectiveness of the membranes.

Despite its many advantages, the Teflon-like membrane also contains specific difficulties. For instance, the method of synthesizing the material is energy-intensive. But, the researchers assured the public that this is something that they will improve on in their upcoming research. Plus, based on the Teflon-like membrane’s longevity and low operational costs, the overall energy costs will be significantly lower than the current methods.

Additionally, the test sample is just single nanochannels. So, the researchers are working to develop a membrane around 1 meter across with other specialists in the coming years. In addition, they are working on similar membranes to reduce carbon dioxide or other undesirable waste products released by industries.