Asus GeForce RTX 3080 Noctua Edition will include Noctua’s hyper-quiet GPU and CPU cooling fans. Thus the new Asus card might become the “quietest card” in its class. Additionally, the 92mm fans on the standard RTX 3080 are now switched to two NF-A12x25 120mm fan units. Last year, the Asus GeForce RTX 3070 Noctua Edition was a success. However, it had its boundaries, such as 8GB of GDDR6 memory onboard. But, the new product addresses those limitations with a more powerful GPU and 10GB of GDDR6X memory. Therefore, the new model will either achieve the same success or more. 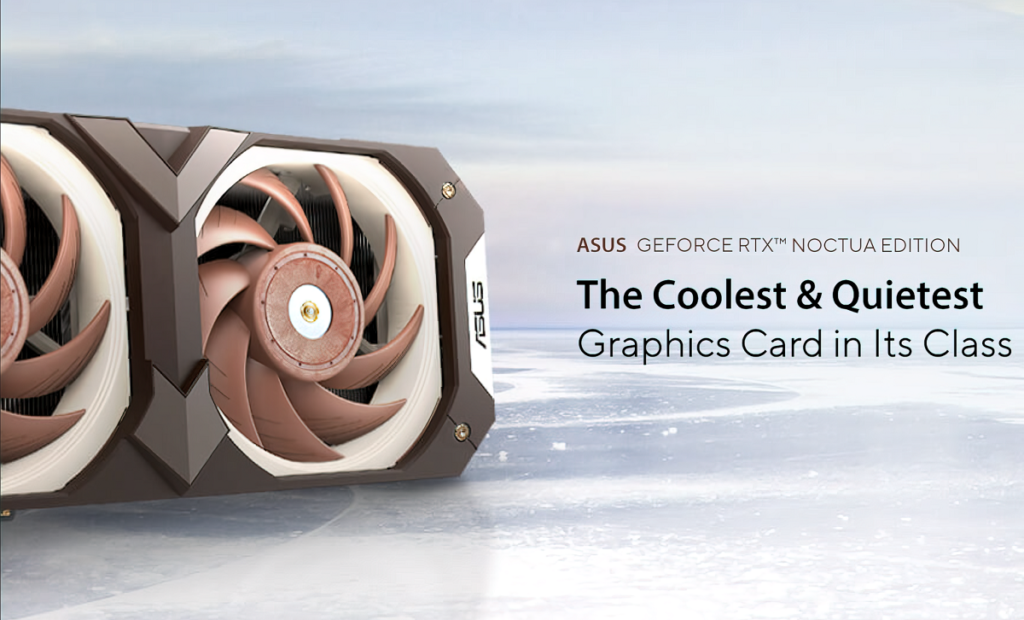 Furthermore, Noctua and Asus worked together to develop the new RTX 3080 Noctua Edition by increasing the graphic card’s heatsink size. Additionally, the new card combines the advantages of Asus’ engineering, Nvidia’s GA102 GPU coupled with 10GB of memory, and Noctua’s expertise in cooling. The company also added benchmarks to show that the RTX 3080 surpasses the Asus TUF models’ thermal and noise levels. Hence, the Noctua Edition runs 4.5 dB(A) quieter at typical auto-speed fan settings, achieving 3°C lower GPU temperatures and 14°C lower VRAM temperatures. And although the Asus GeForce RTX 3080 Noctus Edition will release next month, there is no word regarding its price.

However, a quiet fan unit has certain disadvantages. Consequently, even though they are very effective, quiet fans need a proper setup for performing to their maximum potential. Hence, a nice roomy PC case with solid airflow is a must. Besides that, quiet fans also require other additional components to balance out the cooler.

Moreover, users cannot overclock GPUs and CPUs with silent coolers to avoid thermal throttling. Thus, adding another large 120mm fan can prevent such a scenario. However, this could cancel out the quiet feature of the silent GPU/CPU depending on the PC setup.