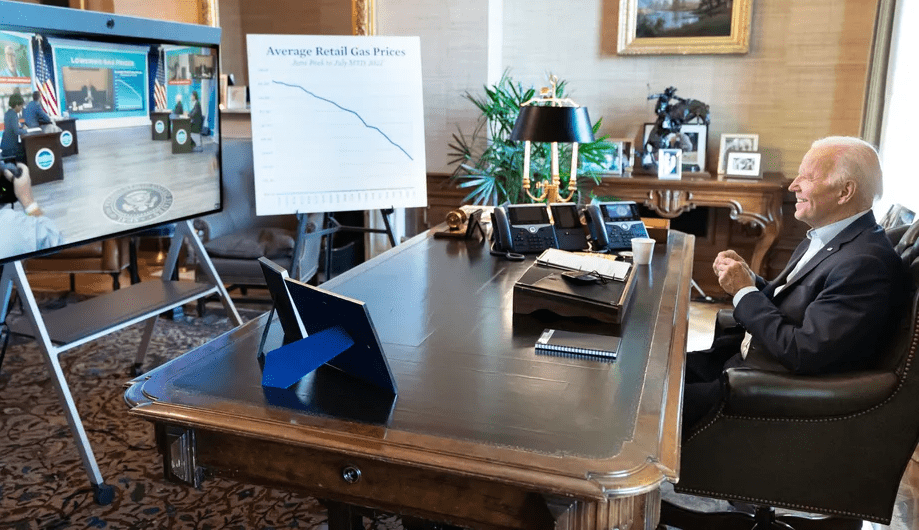 On Friday, President Joe Biden tweeted a photo showcasing the falling gas prices. But, the image also contained the video conferencing gear the president uses for Zoom meetings. The White House has been using ‘Zoom for Government’ for a while. And the Zoom rig at the White House, as seen in the image, is a pretty impressive, easel-like setup. Experts say it is a Neat Board, made by a Norwegian company. Previously, Neat confirmed that the Zoom rig at the White House is indeed a Neat Board. However, even the company was surprised to find it in the Oval Office.

Additionally, the board is a video and a collaboration gadget sporting a 65-inch 4K screen. It has an integrated touchscreen, whiteboard tool, and a 12MP camera with 4x digital zoom. Most importantly, the Neat gear supports both Teams and Zoom. Experts say it resembles Google’s Jamboard or Microsoft’s Surface Hub.

Gas prices are declining at one of the fastest rates we have seen in over a decade – we’re not letting up on our work to lower costs even further. pic.twitter.com/suEKuKXyKP

In the image shared by Biden, the Zoom rig is around six feet tall and weighs approximately 125 pounds. In addition, the Neat’s gear at the White House costs about $7,280 as it is customized. It has been in the Oval Office since Biden’s inauguration. The device can roll and swivel to face the couch in the office or Biden at the Resolute Desk.

There are various video conferencing rigs around the White House. For instance, Biden seems to use a high-end camera and feed that into Zoom for the most official and high-stakes moments, similar to a standard TV broadcast. However, in the Roosevelt Room, the TV conferencing rig contains a standard camera with Biden sitting at the head of the table, facing the camera. In addition, the Situation Room consists of a dedicated setup. And Camp David has a camera and a Sharp TV built into a wall for video conferencing.