Amazon recently announced that it is adding an impressive new feature only accessible to iOS users. Interestingly, iOS Amazon users will now get to virtually try-on shoes on the app. Additionally, it will be available to customers in the US and Canada to try on shoes from brands like New Balance, Adidas, Reebok, etc.

How does it work?

The ability to virtually try-on shoes via AR tech on Amazon before hitting the “Buy Now” button sounds fantastic. With this new feature, customers have to point the camera at their feet and scroll through different shoes to see how they look from different angles. However, determining the show size is still a hurdle even with this fantastic feature.

Additionally, it is now available to iOS users with iPhone 7 or newer models. But, Amazon assured its customers in a blog post that the feature will soon extend to Android users. 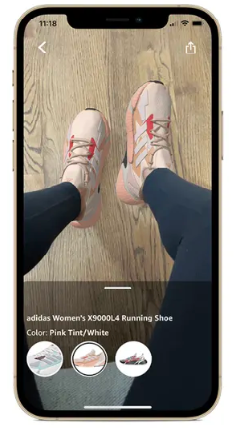 On another note, Amazon launched an in-app AR feature in 2017, enabling customers to preview how furniture might look in their space. Later, this functionality expanded to beauty products, allowing customers to try-on makeup in the app. Plus, it was in partnership with L’Oreal and tied to its brick-and-mortar Amazon Salon.

Additionally, the AR feature of the Amazon Salon allowed customers to check how hairstyles and hair colors look before getting either of them. And besides all these and the new virtually try-on shoes feature, Amazon has try-on features too. For example, it includes some glasses and Made for You custom-fit T-shirts.

Lastly, Amazon customers with iPhone 7 or later in the US and Canada can scan the QR code on Amazon’s website. After that, they can virtually try on shoes by searching the term “Virtual Try-On” inside the app. Anyways, online shoe shopping just got a whole lot of fun for iOS users.