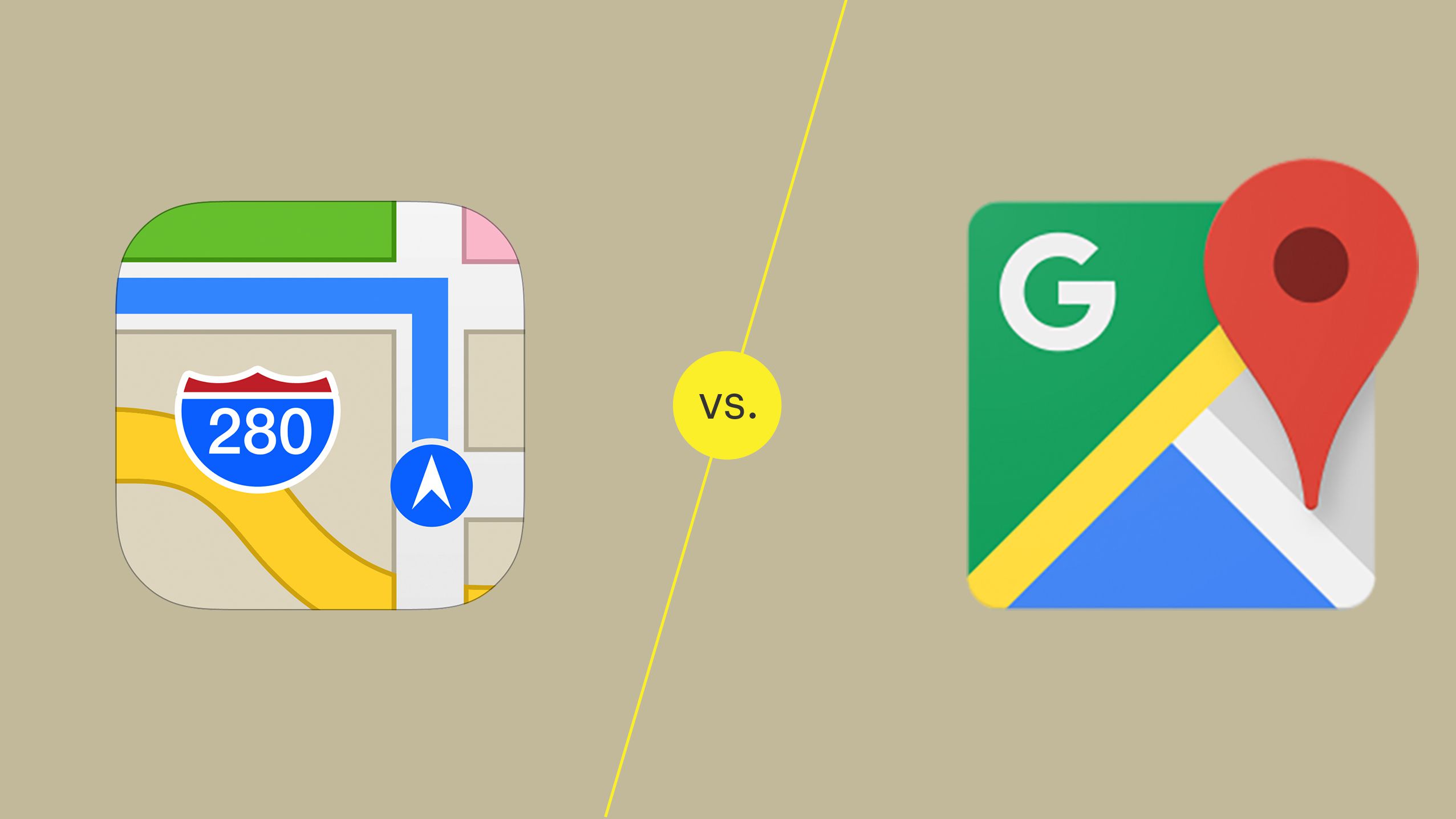 Deciding between Apple Maps and Google Maps isn’t easy since both apps offer many valuable features to users. However, here’s a quick comparison of those features for users to determine which app would suit them the best.

Availability of the app

On the one hand, Apple Maps is exclusive to Apple devices only. But on the other hand, Google Maps is available on almost all devices, whether Android, Mac, iPhone, Windows, etc. In addition, users just have to log into their Google account to sync all their Maps data across all devices. So, in this case, at least, Google Maps trumps Apple Maps. 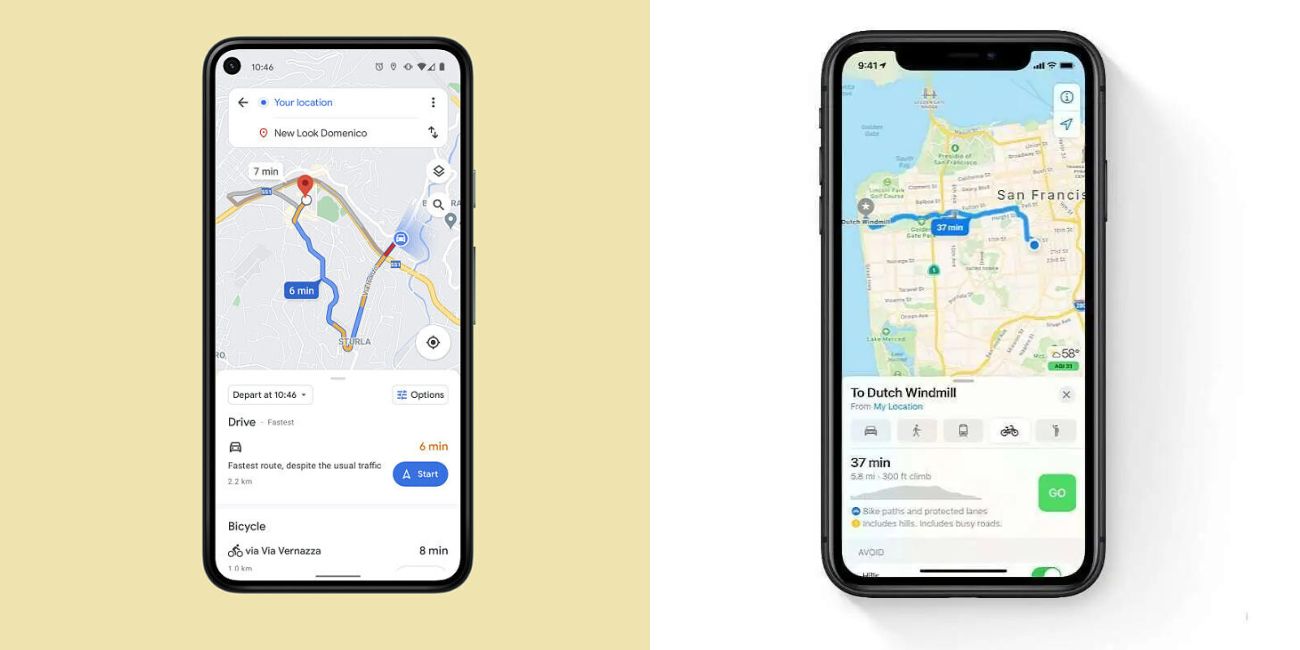 Both Apple Maps and Google Maps have an easy-to-use interface. However, Apple Maps’ interface keeps everything in one place. Therefore, if users expand the search bar, they find everything – from recent search history and saved locations to details about businesses or places. But, Google Maps, on the other hand, has an interface filled with various buttons and toolbars. For example, the search bar appears at the top of the screen, above dedicated buttons for finding local amenities like a restaurant, gas stations, etc. And at the bottom of the screen, a menu gives users access to the Explore and Commute features, saved location, local news, etc. In any case, Google Maps appear much more cluttered than Apple Maps.

Design of the Map

Apple Maps has a more simplistic design. Thus, users can’t get much information unless they zoom all the way in. On the other hand, Google Maps starts showing extra information a lot sooner than Apple Maps once a user zooms in. In addition, both the maps use a dark mode, making it easier for users to use them at night. However, Google Maps provide a lot of excess information, making it annoying to use.

Apple Maps and Google Maps are very good at navigation – providing users the proper ETA, directions, traffic, etc. In fact, both apps offer a similar primary route for the same location. But, strangely, the alternate route options differ in both apps. Besides, Google Maps allow users to add multiple stops in a route beforehand. But, Apple Maps only enables users to add pit stops mid-route for gas stations, etc. In addition, Google even plans to update its method of calculating routes to provide users with ones that are safe and save more fuel. So, that’s a plus point. 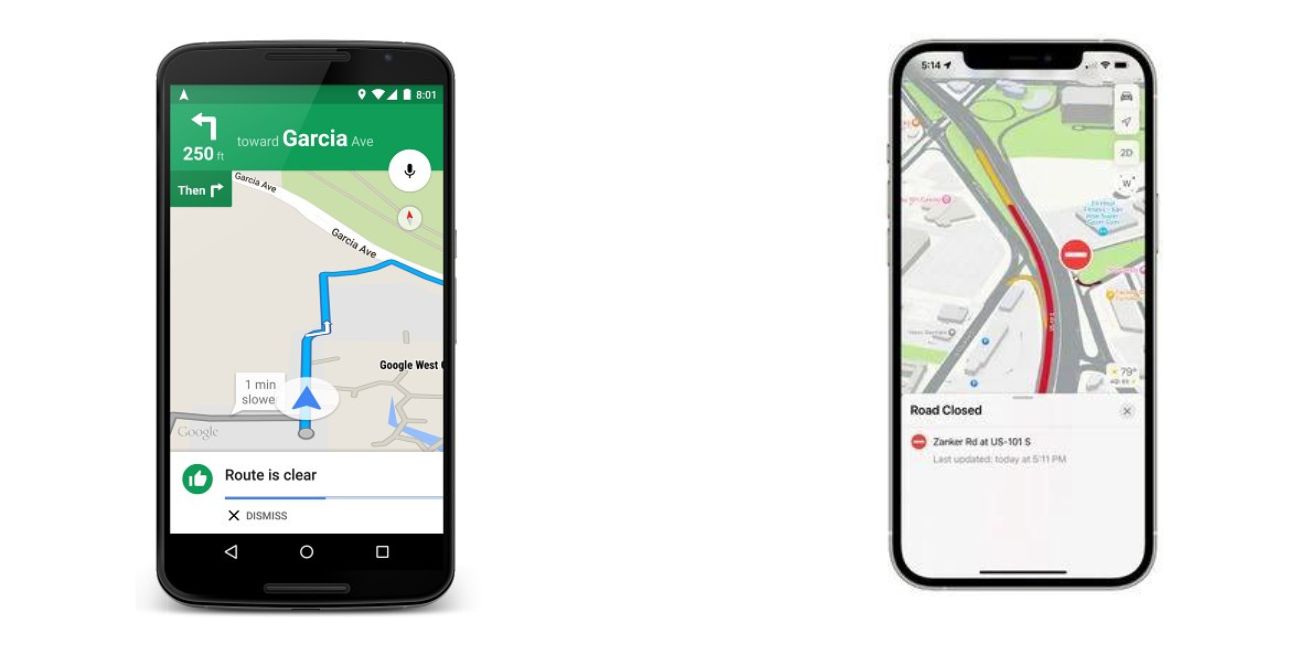 Both maps have access to real-time traffic data. And thus, users can immediately know of any road closures, heavy traffic, etc. In addition, users can even report accidents, speed cameras, or any other hazards on a route to alert other users. Additionally, the Commute feature in Google Maps offers a lot of benefits. For example, users can set up their work and home location in the settings and get various route options along with how busy the routes are. And Google Maps enable users to adjust their arrival or departure time in the app, whereas Apple Maps does not.

When traveling to an unknown location, Google Maps makes it easy to find amenities like nearby restaurants, hospitals, etc. The buttons are right there as soon as one opens the map. In addition, users can even search for more locations in the Explore option. Apple Maps has a similar feature – ‘Find Nearby.’ But unfortunately, the options offered are not as many as those offered by Google.

Additionally, the information regarding any place on Google Maps is much more extensive than on Apple Maps. Therefore, making it easier for users to know more about a location. So, perhaps, the cluttered interface of Google isn’t that bad after all.

Apple Maps offers users a lot more privacy than Google Maps does. The former practices a process called “fuzzing” that ensures users’ identity remains anonymous. And any data the app does have gets stored on users’ devices. So, when they delete it into settings, the data is gone for good. However, on Google Maps, users’ every move goes through its servers. And Google then uses this data to personalize ads better. Thus, Google Maps is a lot less private than Apple Maps. Navigation is the primary reason people use Maps. Fortunately, both apps do the job adequately. However, if users prefer less clutter on their Maps’ interface or more privacy, they can lean towards Apple Maps. But, if they require a load of data regarding a location or place, and don’t care about needing privacy, then Google Maps should be their choice. In any case, it’s just a matter of preference.