Home » News » NASA shared the images of “ Enchanted Lake” on Mars: Evidence of past life! 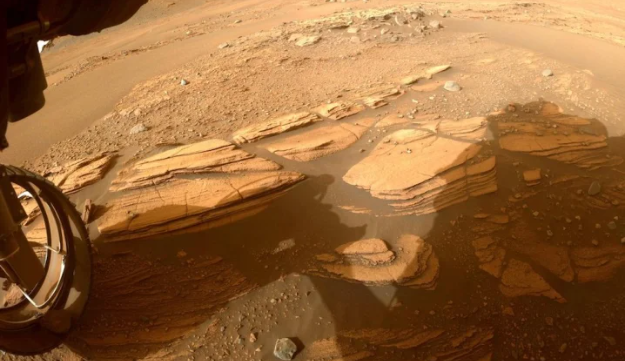 NASA has shared pictures of the “ Enchanted Lake” on Mars, a sedimentary rock, making it a perfect spot to look for signs of early life on Mars.

The scientist named the “ Enchanted Lake” on Mars after the name of a landmark in an Alaskan National Park. This image of the “ enchanted Lake “ was first captured by Perseverance Rover’s Hazard Avoidance Cameras (Hazcams) on April 30, 2022.

According to scientists, such sedimentary rocks result from fine soil particles carried by the atmosphere or water and deposited in layers that turn into rocks over time. For example, they found the “Enchanted Lake” near the base of ‘Jezero Crater’s delta.  Although scientists named it an “Enchanted Lake,” it looks as dry as a desert, just like the rest of the red planet.

However, scientists believe in the existence of water, and there is a chance of existence of life on Mars in the past time. Images of Mars as taken by the Perseverance Rover proved to some extent the possibility of life on Mars. The scientists believe to have found the first evidence of microbial life away from the earth.  Also, Perseverance Rover is the first to collect Martian rock and regolith, Mars’ version of soil.

In a NASA press statement, Katie Stack Morgan, deputy project scientist for NASA’s Perseverance Mars rover, said, “When I saw the image of Enchanted Lake, it was love at first sight. It provided our first up-close glimpse of sedimentary rocks – the ones I’ve been most eager to explore since Jezero was named the landing site for Perseverance nearly four years ago. Enchanted Lake was our first close encounter with sedimentary rocks in Jezero, but we’re going to do what rover missions do best – look around, drive, and then look some more”.

Moreover, due to the scorching climate conditions, preserving the igneous rocks fossil for further investigation on Mars is challenging. Now, scientists declared the sedimentary rock as an ideal spot for further research to track the signs of past life on Mars.

Also, the image was taken in April; the Perseverance rover has traveled and parked itself halfway in a field of sedimentary rocks the scientists call ‘Hogwallow Flats.” Over the coming weeks, the rover will examine and maybe even take samples of one or more of the rocks in the area. The team will then decide whether to go back to Enchanted Lake or analyze the other rock formation of the Jezero delta.