Apart from being a source of fun, entertainment, and a source of income for many, video games also prove to be therapeutic for many. Video gaming can pave the way to create connections with like-minded people across the globe while also offering fun-filled distractions.

Gamers Outreach is a charity organization that brings accessible video games to children admitted to a hospital for a long duration. Zach Wigal, the founder remarks that “Each year, millions of kids and teens receive medical care inside hospitals, and for many, the process can be scary and isolating. During hospitalization, kids lose access to friends, school, and moments that define childhood.” He noted that Gamers Outreach’s mission is to change their experience. 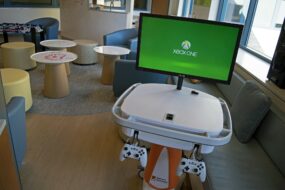 Therefore, to take a step ahead in its initiative, Gamers Outreach joined hands with Xbox and announced: “Beyond Xbox: Therapeutic Play” on Monday, March 28, 2022. Hence, the GO Karts, a fully mobile cart created by Gamers Outreach, will now include an Xbox, controllers, games, and monitors for hospitalized children. In addition, the GO Kart comes with gaming equipment suitable for children with any form of illness or disability, providing them an outstanding gaming experience while admitted to a hospital.

Moreover, following the announcement, Xbox and Gamers Outreach also released a short documentary film titled “A Player Like Me.” The film features a 14-year-old boy suffering from Ehlers-Danlos Syndrome using GO Kart to connect with another teenager with the same rare disability from nearly 4,000 miles away. The video portrays both kids playing Forza Horizon 5 while relating their conditions and lifestyles.

The film aims to prove how therapeutic video gaming can be for children staying in hospitals and how it helps them make new friends. Michael Flatt, director of global integrated marketing at Xbox, stated, “At Xbox, we believe that play is a fundamental human need.” He further remarked, “We are proud to support Gamers Outreach and bring the fun, creativity, and connection of gaming to children to help support them during their recovery.”